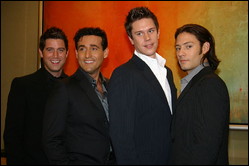 The idea behind Il Divo's creation came to Cowell after hearing Andrea Bocelli singing Con te partirò while watching The Sopranos. Aware of this new appreciation for lyrical voices and classical music, he decided to form a multinational quartet (the members hail from Spain, Switzerland, France, and the United States, the name being in Italian) that tried to recreate the style of The Three Tenors.

Il Divo sings in English, Italian, Spanish, French, and Latin. Il Divo was named the Most Multinational UK No.1 Album Group in the 2006 edition of the Guinness Book of World Records.

On 25 April 2007, Il Divo performed on American Idol in one of the "Idol Gives Back" episodes, which raised money for children in the U.S. and Africa. For every vote cast during that show, Idol sponsors Coca-Cola, AT&T, and others donated money to Charity Projects Entertainment Fund (CPEF) and other groups such as Save the Children and America's Second Harvest.[3]

On 12 December 2008, Il Divo performed their new song at the Swedish Idol 2008 finale in the Globen Arena in Stockholm.[4]

Having just completed a six-month tour of America, Australia, and Europe, Il Divo then participated in all 20 concerts by Barbra Streisand in her North American tour as her special guests. "Streisand: The Tour" with Il Divo was ranked second for all tours for 2006, generating $92.5 million in gross sales.

On 9 June 2006, Il Divo performed the 2006 FIFA World Cup official song, "The Time of Our Lives," with R&B singer Toni Braxton live, at half-time, during the opening match between Germany and Costa Rica, and again a month later at the 9 July closing ceremony.[5][6] The song is available exclusively on the Voices from the FIFA World Cup compilation album, and on the European reissue of Braxton's album Libra, but not on any Il Divo album. A shortened version of the song is featured on the second disc of Braxton's greatest hits album.

Recording started in the first half of 2004 in Sweden, with producers Quiz & Larossi, Per Magnusson & David Kreuger and in the UK with producer Steve Mac. This self-titled album contained the Spanish rendition of Toni Braxton's hit "Unbreak My Heart" (Regresa a Mí), (Braxton had originally released "Regresa a Mi" as a b-side to her 1996 single, "Unbreak My Heart"); their second single and first original song "Mama"; Sinatra's "My Way" (A mi manera); "Nella Fantasia," and 1994's San Remo Festival winner "Passerà."

The album hit the #1 slot on both Amazon.com and BarnesandNoble.com after a career-defining appearance on The Oprah Winfrey Show on 5 April 2005, where they performed "Regresa a Mi".

In the United Kingdom, the Il Divo album knocked Robbie Williams out of the number 1 spot in the UK charts, Williams allegedly said to them at the "Bridget Jones: The Edge of Reason" film premiere, So you are the four idiots who have forced me off my number one spot!.[7]

This multiplatinum-selling CD became number one in the charts in a total of 13 countries around the world, and achieved top 5 placing in 25 countries.

This was recorded in both Sweden and London with producers Per Magnusson, David Kreuger and Steve Mac, who were also the producers of their first album. Released on 7 November 2005 in the UK, it hit number one both in the UK and Australia within one week. Ancora was released in the US on 24 January 2006. It entered the Billboard albums chart at number 1, selling more than 150,000 copies during its first week of sales.

Highlights include "Isabel," "I Believe In You (Je crois en toi)," a duet with Céline Dion, a Spanish version of Secret Garden's "You Raise Me Up" (Por ti seré), and a Spanish cover of Eric Carmen's "All by Myself." Two of the tracks on the non-American release of this CD, "O Holy Night" and a version of Schubert's "Ave Maria," also appear on 2005's The Christmas Collection.

Recorded in 2005, the album is a collection of Christmas and holiday-inspired songs.

Is a collection of songs released at the time of the 2006 FIFA World Cup.

Released on 21 November 2006 in the United States and one week later in the rest of the world.

An upcoming album scheduled for release in November 2011. Il Divo premiered the first song from the album, Dove L'Amore, in a live performance at the Classical Brit Awards on Sunday 12 May 2011. At the same event Il Divo received the award for 'Artist of the Decade'.

The Il Divo release "Mama" The Video, which includes exclusive footage of the "Making of the Video," a live recording of "Mama Live In New York," plus a photo gallery.

An open air "live" concert filmed at the Teatro Romano (aka World Heritage site "Archaeological Ensemble of Mérida") in Mérida, Spain, 2005 and was released as DVD on 24 January 2006. The DVD features 8 tracks, including:

Live at the Greek Theater

The second official DVD release of Il Divo, this contains the full live concert performed on 27 June 2006 at the Greek Theater in Los Angeles, California as part of their World Tour 2006. This recording captures all the songs that have established the group's popularity, such as their breakthrough hit "Regresa A Mi" through to their original songs such as "Mama," "Si Tu Me Amas," and the only song taken from their Christmas album, "Rejoice." They also performed a previously unreleased rendition of the iconic song "Somewhere" as featured in the musical West Side Story. Most releases in the United States of America do not have "Everytime I Look At You" on it as a major music distributor bought the rights to it in order to promote this song as a bonus track on their release of the DVD, despite the tracklisting on the back-covers still listing the track.

The DVD was released in the UK on 1 December 2008, but the show was in Pula, Croatia.

It features performances of:

With an in-depth 30 minute interview entitled 'The Promise Il Divo In Conversation.'

While partaking in their largest worldwide tour, Il Divo recorded and released An Evening With Il Divo Live In Barcelona, a live DVD with an accompanying 10-track CD with songs from the concert. It was recorded at Il Divos largest capacity performance in Europe and took place at Palau Sant Jordi on 3 April 2009 with attendance of 20 000 people. Added to the setlist are two previously unrecorded songs by the band, Bridge Over Troubled Water and The Impossible Dream. Extras include a "behind the scenes footage/making of the tour" interview with Il Divo. Il Divo turned to the famous choreographer William Baker for a fresh look and feel, as his most famous work is for vastly different music and performers, mainly Kylie Minogue.

This article uses material from the article Il Divo from the free encyclopedia Wikipedia and it is licensed under the GNU Free Documentation License.

Nature Boy Adrienne West & Dado Moroni Trio
Update Required To play the media you will need to either update your browser to a recent version or update your Flash plugin.