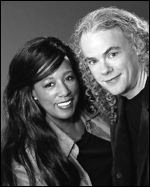 Oklahoma born guitarist Tuck Andress met singer Patti Cathcart, a native of San Francisco, at an audition in Las Vegas in 1980.[1] Prior to this, Tuck had been a session performer with The Gap Band.

Tuck and Patti began performing together in California in 1981 and married in 1983. After signing with Windham Hill in 1987, they released several albums for the label before signing with Epic Records for one album in 1995. After several more on Windham Hill, their releases after 2001 have been on 33rd Street Records.

Tuck Andress' niece is singer-songwriter Annie Clark, who goes under the moniker St. Vincent. As a teenager, Clark was a roadie for Tuck and Patti, and later she was an opening act for the duo.[2]

This article uses material from the article Tuck & Patti from the free encyclopedia Wikipedia and it is licensed under the GNU Free Documentation License.