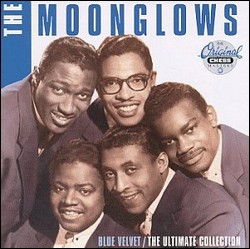 Fresh from a stint in the U.S. Army, two friends, Harvey Fuqua and Bobby Lester, formed a duo in 1949 in Louisville KY.[3] In 1951, Fuqua moved to Cleveland and formed the Crazy Sounds with the singers Danny Coggins and Prentiss Barnes.[3] Lester joined them later.[3]

In 1952, while performing at a Cleveland club, the Crazy Sounds auditioned for the club's management. They soon got in contact with the radio host Alan Freed, who upon hearing them became the group's manager.[3] In 1953, Freed renamed the group the Moonglows, after his own nickname, Moondog.[3] They signed with Freed's Champagne label, but their recordings for the label failed to make the charts. Coggins left the group and was replaced by Alexander Walton, who was sometimes known as Pete Graves or Pete Walton.[3]

In 1953, they recorded for another small label, Chance, but like their Champagne recordings, their records had little success; their cover of Doris Day's "Secret Love" was their most successful for Chance.[3] In September 1953, Freed obtained a contract with the New York radio station WINS. His success as a broadcaster and host of the station led to a contract for the Moonglows with Chess Records.[3]

Their first Chess single, "Sincerely", led by Lester, reached number one on the Billboard R&B chart and the top 20 of the pop chart. The song was later a crossover success in a cover version by the McGuire Sisters.[4] In 1955, the band picked the guitarist Billy Johnson to be their fifth member after Wayne Bennett left the group following their engagement at the Apollo Theater.[3] That same year, the group had another R&B hit with "Most of All", followed by a more modest success with "We Go Together" in 1956.[3] Chess issued some of their recordings with the group credited as the Moonlighters.[3]

For most of the Moonglows' tenure, the lead vocals were split between Lester and Fuqua. Lester preferred doo-wop ballads, whereas Fuqua preferred rock-and-roll songs.[3] The two also recorded vocal duets.[3] Their next hits, in 1956, included "See Saw", which peaked at number five R&B and number 25 on the Billboard Top 100, and "When I'm with You". which reached number 15 on the R&B chart.[3] In August 1956, the band appeared in one of the first rock-and-roll movies, Rock, Rock, Rock, lip-syncing "Over and Over Again" and "I Knew From The Start".[3]

By December 1956, Fuqua had begun to sing most of the vocal leads.[3] In June 1957, the Moonglows had an R&B hit with their cover of Percy Mayfield's "Please Send Me Someone to Love". In late 1958, the Fuqua-led "Ten Commandments of Love" (used in soundtrack of "A Bronx Tale"[5]) reached number nine R&B and number 22 pop; the group was billed as Harvey and the Moonglows.[3] Chess released two EPs and an album, Look, It's the Moonglows, during that period.[3] Following that release, the original group broke up at the end of the year, performing together only for contractual reasons.[3]

In 1959, Lester began a solo career.[3] That same year, Harvey Fuqua, following the advice of another Chess artist, Bo Diddley, worked with the Marquees, where Fuqua first met Marvin Gaye. Relocating the group from their hometown of Washington, D.C., to Chicago, Fuqua soon brought Chuck Barksdale into the group after Barksdale's group, the Dells, was temporarily on a break following a car crash involving one of its members.[3] Fuqua renamed the group Harvey and the New Moonglows.[3] In April 1959, Fuqua sang lead on the ballad "Twelve Months of the Year", which included a spoken recitation by Gaye, repeating an early trademark of the Moonglows in "Ten Commandments of Love".[3] Later in 1959, Chess issued the songs "Unemployment" and "Mama Loocie", which was Gaye's first lead vocal.[3] Most of the time, Fuqua recorded solo numbers and often promoted his and the New Moonglows' songs on TV and in movies.[3] During this time, the group recorded background vocals for the likes of Etta James and Chuck Berry.[6][7]

Lester later formed his own Moonglows group. In 1959, he made headlines after he was arrested on a narcotics charge in Beaumont, Texas.[3] In early 1960, James Nolan left Fuqua's group, as did Reese Palmer. According to Palmer, they left to raise their families.[3] Chuck Barksdale also left to rejoin the revived Dells.[3] In late 1960, Gaye, Chester Simmons and Fuqua recorded (along with, presumably, members of the Spinners) the last New Moonglows recordings, including "Junior" and "Beatnik".[3] Afterwards, Gaye relocated to Detroit and later signed with Tamla, a subsidiary of Motown Records.[3] In February 1961, Fuqua left Chess and worked on his own Detroit labels, Harvey and Tri-Phi, until he joined Motown's production team. He left Motown for RCA in 1970.[3] In 1969, Prentiss Barnes retired from show business after complications of injuries from a car crash.

In 1970, Harvey Fuqua, Bobby Lester and Pete Graves reunited as the Moonglows with Doc Williams and Chuck Lewis.[3] In 1972, they recorded "Sincerely '72" for Big P Records.[3] RCA soon bought Big P and reissued "Sincerely '72", which reached number 43 on the R&B chart.[3] The album The Return of the Moonglows was also released that year.[3] The reunion proved to be short-lived.[3]

Bobby Lester continued to sing lead for his own Moonglows group until he succumbed to complications of cancer in 1980, at the age of 49. He was replaced by Billy McPhatter, son of Clyde McPhatter.

The Moonglows' singing style is known as "blow" harmony, based on the technical method used by the backing vocalists. The Chi-Lites used this style on their hit "Oh Girl" in 1972.

This article uses material from the article The Moonglows from the free encyclopedia Wikipedia and it is licensed under the GNU Free Documentation License.