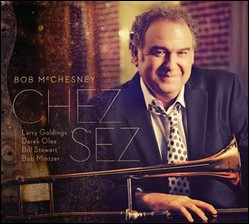 Bob McChesney is an LA based jazz and studio trombonist, famous for his use and mastery of the 'doodle - tongue,' a method of articulation on the trombone as well as his ultra fast and melodic solos.

McChesney is a trombonist born in Maryland. He began studying trombone at the age of nine and holds a bachelor's degree from State University of New York at Fredonia. He moved to Los Angeles in 1979.

He can be heard as a jazz soloist on his own No Laughing Matter - The Bob McChesney Quartet Plays Steve Allen, Horace Silver's It's Got to Be Funky (1993), and on Bob Florence's Grammy-winning album Serendipity 18.

Chega de saudade Damaris Roser Quartet
Update Required To play the media you will need to either update your browser to a recent version or update your Flash plugin.