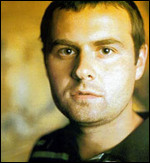 Alan White (born 26 May 1972) is an English drummer, best known as being the drummer of the English rock group Oasis between 1995 and 2004. He is the longest serving drummer in the band's history, performing on four studio albums, two compilation albums and one live album during his tenure. He joined the band in May 1995 after the band's original drummer Tony McCarroll was removed from the band. He was recommended to Noel Gallagher by Gallagher's friend Paul Weller. Notably, Alan's brother Steve has been longtime drummer for Weller. White left the band in early 2004 in somewhat unclear circumstances. He was replaced in Oasis by Zak Starkey, drummer of The Who and son of The Beatles' drummer Ringo Starr.

In 1988 White auditioned to join future Oasis member Gem Archer's band Whirlpool. "He came down and just blew us all away," remembers Archer.[1] "I thought he was mega but the others were worried what a 15-years-old kid on the road and on the lager would be like. I rang his dad and told him: 'Sorry. But don't worry he's fantastic. He'll go all the way.' And he did. It was the weirdest day when he welcomed me to Oasis. And he hasn't let me forget it." White also played drums on Andy Bell's wife Idha's solo album, forming a connection with another future Oasis member. It was at this session that Noel Gallagher first heard him playing, though he was recommended to Noel by Paul Weller. Prior to joining Oasis, White drummed with London-based band Starclub and also for Dr Robert, lead singer of The Blow Monkeys.

White's brother, Steve White, had played with Paul Weller's The Style Council and various other famous musicians, including The Who. Because of this connection, Alan mentioned that Steve impacted greatly his development as a drummer. His other influences include Keith Moon, Ringo Starr, Chad Smith, Mick Avory, and John Bonham.

White replaced original Oasis drummer Tony McCarroll in May 1995 and was immediately "thrown in the deep end", joining the band the very next day to perform a playback of Some Might Say in front of a national TV audience on BBC1's long running music programme Top of The Pops. One of White's first live shows with Oasis was in front of a massive crowd at the Glastonbury Festival in June 1995.

Until the arrival of Andy Bell in the Autumn of 1999, White was the token southerner in the otherwise Mancunian Oasis. Initially known, inventively, as 'Whitey', he was later re-christened 'Dave' by the band because he once served himself a drink from an unattended bar, therefore resembling the character Dave from "The Winchester" in the '70s TV series Minder. White commented on the "North/South divide" saying it was not that bad, but "for ages I was the 'Cockney cunt' and they were the 'Manc fuckers'". In his book "What's the Story?" Ian Robertson stated that White was also known by the phrase "Alan White - He's alright". White was also entrusted with the job of being Liam Gallagher's 'official' drinking partner and was also said to be his best friend in the band. Together the pair were known as 'Bert and Ernie', named after the Sesame Street-characters. In December 2002 Liam and White were involved in a high-profile brawl in a German bar. Consequently, Liam lost some of his front teeth and White, was inebriated and had a brain scan in a hospital afterwards after suffering minor head injuries. Both were arrested by the authorities and were released only after the band's management paid for their bail.

Noel Gallagher has stated that White had a far greater significance to the band than a mere session and touring drummer, claiming that he helped immensely in the recording process. Noel also said that when he wrote a song he would play it to White who would often adapt the rhythm of the song or advise Gallagher on possible changes in the tempo.[2]

At the time of his departure White was the longest-serving member in Oasis beside the Gallaghers (he has since been passed by Andy Bell) and passed through thin and thick with the brothers despite being struck down several times with bouts of alleged tendinitis during his later years with the band. White performed on four of Oasis' studio albums: (What's the Story) Morning Glory? (1995), Be Here Now (1997), Standing on the Shoulder of Giants (2000) and Heathen Chemistry (2002). He also played on the majority of band's b-sides, some of which were released on the b-side record The Masterplan (1998).

White married model Liz Atkins on 13 August 1997 at Studley Priory Hotel, Oxfordshire. He had met her on the set of the "Don't Look Back in Anger" music video. The couple divorced in 2000.

In early 2004, White surprisingly left Oasis during the early recording sessions for the band's sixth album. According to Oasis' spokesperson there were some new tracks and demos with White's performance as well, which were made at the end 2003 and early 2004 at the very first demos for their upcoming album, before his departure.

In a recent interview, Noel Gallagher alluded to White's personal problems: "He's a fucking great guy and he's one of the best drummers I've ever met in my life, but his personal life is fucking chaos. In the end he fucked off and we haven't seen him since.".

In an interview on Radio 1 with Chris Moyles (15 August 2008) Noel Gallagher stated that White was "kicked out" of the band.

There is also evidence to suggest that White was upset that his drums were going down so low in the mix on top of the prevalence of drum loops ("Go Let It Out", "Gas Panic!", "The Hindu Times", "Better Man", "Force of Nature"). On one Q&A with Freddie Gee, he had said: "Well, I don't like that my drums get turned down with each successive mix we do of an album, but one mustn't grumble in this band".

White was replaced with Zak Starkey – The Who drummer and the son of The Beatles' legend Ringo Starr. Ringo particularly was cited as one of White's biggest drumming influences. Due to his departure, the band scrapped the first midway sessions and later suffered some prolonged and difficult recording for Don't Believe the Truth (2005).

In March 2007, the remaining members of Oasis paid White £348,000 to buy him out of their company "Definitely Maybe".[3] Since his departure, White has remained out of the spotlight and he has no familiar drumming occupations at the moment. He currently resides in London. His brother Steve has explained lately in his website that Alan "is just having a nice time, he has pursued other interests in business".

White took to the stage for the first known time since Oasis with Trio Valore, as a guest, due to his brother being their drummer. The concert was on 15 June 2008 at the Jazz Cafe, Camden, London.[4]

All from Sabian's hand hammered series unless noted.

Note: White played many different kits in the studio including Gretsch, Pearl and Ludwig.

It's Hard To Decide Biscuit Jack
Update Required To play the media you will need to either update your browser to a recent version or update your Flash plugin.