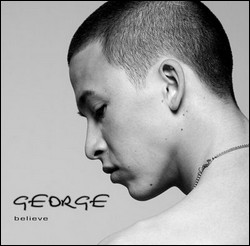 George Nozuka is a songwriter and recording artist.

George Nozuka's new album "Alone" captures the essence of relationships, romance, heart break, sexuality and love. "Alone" is now on iTunes. The single from the album "I'm Reaching Out" is now at radio. The music video shot by Aaron A. will be released later this summer. George recently released his New Single "I'm Reaching Out" on iTunes. The single was produced by Mark Pellizzer and Adam Messinger. "I'm Reaching Out" is the single off of his debut album "Alone" that is now on iTunes. George Nozuka released his debut album Believe in 2007. It was produced by Perry Alexander, Roy "Royalty" Hamilton and Anthony M. Jones and was released on HC Entertainment Group. On the recorded, Nozuka used his mononym George. Three tracks appearing on the album also credited to the mononym George were hits for him, namely "Talk to Me" which was written and produced by Shaun Myers and "Lie to Me" and "Last Time" in 2007. Music videos for the songs were released all directed by RT!. The videos received wide coverage and appeared on Canada's specialized music cable channel MuchMusic's charts.

In 2012, after he released a mixtape entitled Love Me. For the mixtape and later works, he returned to using full name George Nozuka rather than the mononym George as in the case of Believe and earlier singles.

In documentary Forgotten Children: The Story of Haiti's Restavecs

Through the Canadian section of Plan, namely "Plan Canada", he was involved in a documentary about restavecs, slave children in Haiti. The documentary directed by Craig Goodwill and entitled Forgotten Children: The Story of Haiti's Restavecs shows the situation of the restavecs through the eyes of different personalities including pop singer George Nozuka, a Canadian UN peacekeeper, some Haitian youth filmmakers and activists, and former working children themselves.[1] He has produced "Hurting Child" for the documentary.[2]

Featured with other performers

George co-wrote "Home This Christmas" for Justin Bieber, and "I Love Girls" for Cody Simpson.

George is one of seven children to American Canadian mother Holly Sedgwick [3][4] and Japanese father Hiromitsu Nozuka. Sedgwick raised Nozuka and his six siblings as a single mother.[5] He is the older brother of musician Justin Nozuka, musician Henry Nozuka, and actor Philip Nozuka. Other family members include Christian, another musician and two sisters, Margaret and Sandra (Sandy).

Nozuka's aunt, his mother's half-sister, is actress Kyra Sedgwick who is married to actor Kevin Bacon. Edie Sedgwick would have been Nozuka's first cousin.