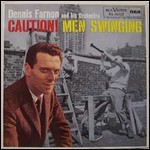 As with his brothers, Brian and Robert, Dennis Farnon's specialism is in light music and orchestral arrangements of well-known standards. Sometimes writing under the pseudonyms John Dennis, Farnon arranged music for a number of artists including George Shearing (Velvet Carpet, 1956), Harry Belafonte and Chet Atkins. Farnon also arranged the orchestral score for the 1958 version of the musical Gigi, and composed the score for the 1966 Tony Curtis film Arrivederci, Baby! He also composed the music for several of the Mr Magoo cartoon shorts in the 1950s.

On television, he composed the theme for the 1970s, London Weekend Television production Bouquet of Barbed Wire. Farnon also composed a large number of library music themes, which more recently have appeared in The Ren and Stimpy Show and SpongeBob SquarePants.

Farnon was one of the founders of the National Academy of Recording Arts and Sciences (now known as The Recording Academy).[1][2] Since the 1980s, he has been resident in the Netherlands.

Just One Of Those Things Diana Krall
Update Required To play the media you will need to either update your browser to a recent version or update your Flash plugin.