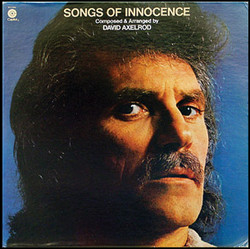 David Axelrod (born April 17, 1931, in Los Angeles, California) is an American composer, arranger, and producer. After starting out as a staff producer for cool jazz labels, Axelrod became famous by the mid 1960s in soul and jazz circles for his recording skills. In 1968, he embarked on a solo career and released several eccentric albums during the 1970s that showcased his characteristic sound, which combined heavily mic'ed drums and baroque orchestration, and avant-garde themes ranging from the environment to heightened mental awareness.[1] With his early solo projects, Axelrod was one of the first recording artists to fuse elements of jazz, rock, and R&B.[2]

David Axelrod was raised in South Central Los Angeles, where he grew up listening to R&B and jazz. His father was active in radical labour union politics. After a stint as a boxer, Axelrod found studio work in the film and television industry, and was soon in demand as a drummer, producer and arranger. He produced his first album in 1959, saxophonist Harold Lands The Fox, which was seen as a landmark record.

In late 1963, he joined Capitol Records as a producer and A&R man, and encouraged the label to develop their black artists. He began working with Lou Rawls, producing his successful Live album and a succession of gold albums and hit singles including "Love Is a Hurtin' Thing", "Your Good Thing (Is About to End)" and "Dead End Street", which Axelrod wrote and produced. He also began working with Julian "Cannonball" Adderley, one of the most successful jazz crossover artists of the 1960s. Axelrod produced Adderleys 1967 album Live At the Club, which spawned one of the biggest jazz hits of all time, the funky "Mercy, Mercy, Mercy, written by the bands pianist Joe Zawinul (who would later, along with Wayne Shorter, create Weather Report, one of the most influential bands in jazz fusion), which reached No. 11 in the US pop charts.

Around this time Axelrod also began working with a regular group of leading session musicians, notably Howard Roberts (guitar), Carol Kaye (bass) and Earl Palmer (drums). In 1968, Axelrod wrote Mass in F Minor and Release of an Oath in a contemporary rock vein for the Electric Prunes; they were released under the band's name, but because of their complexity were recorded by other musicians.[3] The Electric Prunes disbanded during the recording sessions and Axelrod's team completed the albums. These used sweeping strings, booming sound and heavy beats in a way that was unique for the time and became highly influential many years later. Axelrods success also encouraged Capitol to allow him to produce solo albums, the first two of which, Song of Innocence (1968) and Songs of Experience (1969), were homages to the mystical poetry and paintings of William Blake. His third solo album, Earth Rot (1970), warned of the impact of environmental pollution and degradation.

At the same time, Axelrod continued to work with Adderley and Rawls, and with the South African singer Letta Mbulu, bandleader David Rose, and unsuccessful psychedelic groups The Common People and Hardwater. In 1970, he left Capitol and over the next few years issued a rock version of the Messiah and further solo albums, as well as continuing to work with Adderley on several albums until the latters death in 1975. His approach fell out of fashion for a while, and three solo albums he recorded in the 1980s went unreleased.

His work as arranger and composer began to be rediscovered in the early 1990s, and to be sampled by artists such as DJ Shadow and Lauryn Hill. In 1993 he released his first album for over a decade, Requiem:Holocaust. Several compilations of his earlier work were also released. In 2000 he released David Axelrod, which used rhythm tracks originally recorded for a proposed third Electric Prunes album, with new arrangements. Dr. Dre used a David McCallum cut ("The Edge") for "The Next Episode" from 1999's 2001. Masta Ace also used a cut from "The Edge" in his song, "No Regrets" from the 2001 album, Disposable Arts. In addition, "The Edge" was heavily sampled on the Emperor Penguin track "Burnt Sienna and Avocado".

Axelrod appeared at the Royal Festival Hall, London, on 17 March 2004 as part of the Ether festival where he conducted a one off performance of his solo work. He was joined on stage by Richard Ashcroft who sang "Holy Are You", originally recorded by The Electric Prunes. At the end of this rare concert he informed the audience that he was suffering from ill health. In 2006, Live at Royal Festival Hall was released as a DVD and CD.

Axelrod's music has been sampled many times by hip-hop musicians.

In 1993, De La Soul sampled Lou Rawls's Axelrod-produced "You've Made Me So Very Happy" on their track "I Am I Be" from the Buhloone Mindstate album.

In 1994, the Beatnuts became the first musicians to sample one of Axelrod's own pieces: "Holy Thursday" for their track "Hit Me With That" from the Street Level album and again in 1997 where they sampled the Axelrod written Electric Prunes songs: "The Adoration" for their "World Famous Intro" and "General Confessional" for "Niggaz Know", as well as Axelrod's "Life Time Monologue" for Lou Rawls, particularly the song "Thinkin 'Bout Cash".

Also in 1995, producer Joe Fatal on the Fat joe album Jealous One's Envy samples the Axelrod written Electric Prunes song "Holy Are You" in "Respect MIne" and Axelrod's own "Holy Thursday" for "Bronx Keeps Creating It".

In 1996, DJ Shadow in his Entroducing album sampled Axelrod's "The Human Abstract" for his "Midnight In A Perfect World".

In 1999 and 2000, Wu-Tang Clan members Inspectah Deck and Ghostface Killah both sampled "Terri's Tune" by Axelrod for the songs "Elevation" and "Stay True" for the albums Uncontrolled Substance and Supreme Clientele.

Madlib covered "A Divine Image" as part of his Sound Directions project. Cypress Hill used parts of the same song for the track "16 Men Till There's No Men Left" on their album IV.

In 2008, 2 tracks of Axelrod's; "Holy Thursday" and "The Edge" were included in the soundtrack to the blockbuster video game Grand Theft Auto IV.

"Holy Thursday" was looped by rap producer Swizz Beatz for the track "Dr. Carter", which is on Lil Wayne's album Tha Carter III.

"Holy Thursday" was also sampled in part on Sublime's self-titled album in the song "Doin' Time".

"Holy Thursday" was also sampled in its entirety by Skyzoo for the track "The Definitive Prayer" on his mixtape The Great Debaters.

Producer Diamond D sampled the riff at 1:20 of "The Warning Talk (Part II)" to create the basic beat for "Hip Hop" off Mos Def's Black on Both Sides. In 1996 Diamond D also sampled Axelrod, where he uses a portion of "The Mental Traveler" for his remix of Ras Kass's "Soul On Ice".

Quasimoto or Madlib sampled "The Signs pt II' for the track "The Unseen" of his 2000 album The Unseen.

Optical Illusion a South African-based crew sampled "The Edge" in 2005 for the track "Pure Service," produced by BATTLEKAT on their album The Offering.

With The Electric Prunes