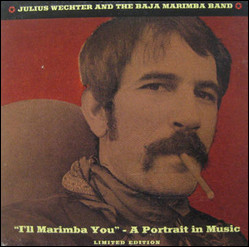 Julius Wechter (May 10, 1935 February 1, 1999) was an American musician and composer who played the marimba and vibraphone. He also played various percussion instruments. He composed the song "Spanish Flea" for Herb Alpert and was leader of the The Baja Marimba Band.

Born in Chicago, Wechter played vibes and percussion for the Martin Denny group in the 1950s. In the early 1960s, he moved on to movie soundtracks and television, as well as session work for the likes of the Beach Boys, Sonny and Cher and various Phil Spector productions.

He began his long and successful association with Herb Alpert and his Tijuana Brass when he played percussion on the Tijuana Brass's first hit, "The Lonely Bull", in 1962. He later composed "Spanish Flea". Playing marimba and vibes on many of the songs on Alpert's subsequent albums in the 1960s, as well as writing at least one song on most of those albums, Wechter contributed much to the Tijuana Brass sound and style without receiving public credit for it at the time.

Encouraged by Alpert, Wechter formed the Baja Marimba Band in 1964 and was quite successful. The "BMB" placed 4 chart songs in Billboard's Top 100,and many more on their Easy Listening Top 40. When the band disbanded in the mid 1970s, Wechter turned his attention to TV and movies again, scoring the Disney film Midnight Madness. He continued to play with Herb Alpert, joining his touring version of the Tijuana Brass in the mid 1970s.

In his later years, he devoted himself to psychology, earned a Master's Degree, and served as vice president of the Southern California chapter of the Tourette Syndrome Association.

He died at his home in California of lung cancer, a day after his song "Spanish Flea" was used in the Simpsons episode "Sunday, Cruddy Sunday".[1]

Always Lars Gullin
Update Required To play the media you will need to either update your browser to a recent version or update your Flash plugin.